Bolivia’s greatest claim to fame is definitely it’s incredible salt flats, or Salar de Uyuni. Spanning 10,582 square kilometers or 4,086 sq miles, it is by far the world’s largest salt flats, left behind by prehistoric lakes that evaporated long ago. People come from every crevice of the world to see this little slice of heaven and rightfully so! Unsurprisingly, our trip to Bolivia actually started way back last year after I saw an Instagram photo of some llamas trotting around on these mirrored flats. I follow a decent number of travel accounts, but I just couldn’t let this wanderlust go!

We deliberately chose to come here during the rainy season because during the months of December to March, nearby lakes overflow, and a thin layer of water creates a mirror-like effect on the flats. The reflection of the sky on the flats is so incredible that it basically looks like you're walking through the sky. Quite frankly, I felt like I was walking on the clouds, and it was AMAZING.

I’ve been fortunate enough to visit many unique places the last couple of years, so many activities always remind me of similar things I have done before. But Uyuni was so one-of-a-kind and breathtaking, that there will never be anything I do again that mirrors (pun intended) it!

Bolivia is a much larger country than you think, and if you thought for a second that these incredible salt flats would be easy to get to, than it probably isn’t worth going there to begin with right? I mean, a place is always a bit more incredible when the journey itself means long rides, lots of waiting, and hours of anticipation for the star of the show. We embarked on our trip to Uyuni from La Paz, though there are many cities that organize transportation options depending on your origin city and country.

HOW TO GET TO UYUNI

The cheapest way to get to Uyuni for us was to take an overnight bus from La Paz by one of the many operating bus companies. After doing a lot of research, we decided on Todo Turismo, which had a departure time of 9pm and arrival of 7am in Uyuni (about 10.5 hours) . We splurged (and by splurged we paid an extra few dollars) to get the best seats on the bus (full-reclining), which are located on the bottom floor of the double decker. For $45, we had a surprisingly comfortable and enjoyable ride. Our tickets also included a bottle of water, dinner, breakfast, and a blanket and pillow to use for the night. The bus also had Wi-Fi, but the reception was pretty terrible and there were no outlets to charge our phones, so that would be the few drawbacks. I can’t really speak for other bus companies since we only had experience with one, but I did enjoy the ride with Todo Turismo and I would use them again if the opportunity presented itself. There are also much cheaper options than Todo Turismo, but since we were afraid of travel fatigue, we opted to pay a bit more for a more comfortable ride. This is a great option for those who want to save some money by not having to stay at a hotel or hostel for the night, and for those who really want to experience what most people do on a trip to Uyuni.

By PLANE: Surprisingly, Uyuni (a small town with less than 30,000 inhabitants) actually does have an airport only less than 10 minutes from the center. It is by far one of the most underdeveloped airports and I have seen, and it is TINY! Seriously, I was a little nervous pulling into the lot in the taxi. We chose to fly on our way back to La Paz due to our travel timeline, and decided that the $100 flight was worth the extra money to get back some time that it would take if we opted for the bus. If you have the extra dollars, buying a round-trip ticket back and forth from Uyuni from whichever airports you are flying in and out of may not be a bad idea if you are short on time and that saved time is more valuable to you than cost of the tickets.

Uyuni is by far the most popular tour for tourists in Bolivia, so there are dozens and dozens of companies offering a variety of options that span from 1 to 3 to even week long tours of the salt flats (both private and open groups). Of course, I haven’t had the opportunity to read hundreds of possible itineraries, but most that I have researched take a very similar route scenic that hits all the major sites. Of course, the longer the tour, the more you will see. I don’t believe you can tour the flats on your own without using a company, even if you choose a private option, so definitely explore the different companies that offer itineraries that suit your taste.

We had booked a 3-day tour for months leading up to our trip, which was actually supposed to be the meat and highlight of Bolivia for us. But as our luck would have it, our tour was actually cancelled 2 nights before the start date due to protests and blockages on the 2nd and 3rd days of the 3-day tour. Apparently, these protests have become pretty common over the last few months, apparently due to political reasons relating to the financials of building and infrastructure. We basically called up every tour on the market using a cell phone from one of the guys at our La Paz hostel and realized that we would only be able to do a 1 day tour. Although we would be missing all of the lagoons and other sites that would be on day 2, we were still glad that we would be able to see Uyuni during the 1 day tour.

Flexibility and adaptation are perhaps 2 of the most important skills you can have as a traveler, since things happen all the time that are out of your control. I mean, right now as I’m writing, I have finally taken off on a flight that was delayed for 3 hours, and I already know I missed both of my connecting flights to get back home. But I guess I’ll just figure it out when I get to the next stop. Even now I’m still reminiscing the beauty of the salt flats on my photo reel.

4-5pm | Sunset on the flats with wine, snacks, and chit chat with groups in other cars

Instead of heading back on another overnight bus back to La Paz since we only arrived that morning, we booked a hostel in Uyuni for the night and hopped on our plane the next morning. I could only describe Uyuni as a bit of a ghost town, with barely paved dirt roads, many stray dogs, few restaurants, and very little in terms of entertainment. It really is a simple town used as a home base for tour companies, so I wouldn't recommend staying long if you were thinking about exploring Uyuni. I do, however, think it is a good idea to rest there for the night to avoid travel fatigue, but make sure you book your hostel in advance because there are very few in town and they will get booked up quickly during popular travel seasons.

And there you have it! My Uyuni experience in a nutshell. And now onto the best part of this post - the incredible photos! I am a normally a bit fan of editing my photos, but to be honest, Uyuni simply looks much better without any. It is simply breathtaking and I didn't want to take away from the brilliant colors and how perfect it is on its own. I wish I were back there right now!

As always, thank you for reading and following my Bolivia Diaries. I hope you enjoy these breathtaking photos!

This cooperative is joint-owned by all salt-workers. The entrance free is only a couple of cents, and you can purchase a small bag of salt for $1USD!

Souvenir and Salt Shopping in Colchani

A tiny town with a population of only 600, Colchani only has 1 main street in town. I stocked up on my fair share of salt souvenirs during out free time to shop which I am excited to use in my cooking back at home!

Onto the magnificent salt flats! There's no other place in the world quite like this. It was pure heaven on Earth and I will never forget how beautiful this day was.

Lunch ON the salt flats was amazing! Not only was it yummy, featuring grilled llama, quinoa, tomato and avocado salad, but you it was quite the meal with the view! We had such great conversations during lunch with backpackers on our trip, and we learned more about our tour guides too! The storm was rolling in quickly though, so we finished quickly toward the end and ran back into the car to continue our drive to a "drier" part of the flats! 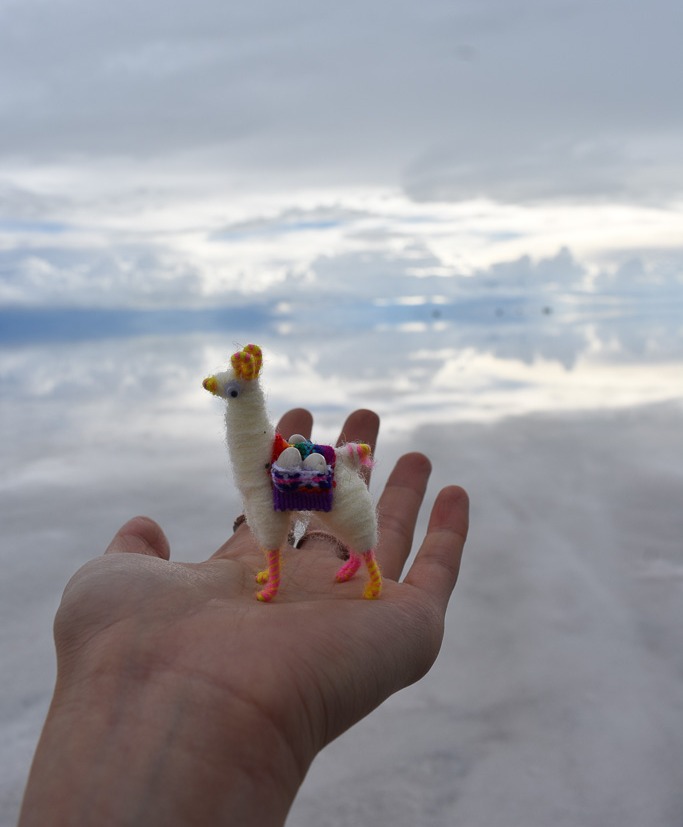